Marriage is No Picnic

This is an understatement.

Everyone who knows me, whether it's extremely well in real life or mostly just as a presence on Facebook, knows that I've been in recovery for over a year for various issues.  Not what you think of as typical issues needing recovery, like drugs or alcohol, but for anger, codependency, and food addiction.  You could add anxiety and depression in there too.  These are all things I struggle with on a daily basis, and do all I can to keep under control.

Of course, I am totally out of control and my life is unmanageable, but that's where God comes in.  And also medicine.  And friends.  And the gym.  And a host of other people, places, or things that help me live one day at a time.

My downfall hit full swing when two of my closest friends announced they were getting divorced.  Well, she announced it.  He reluctantly accepted it. That was two years ago, and I've yet to attend a wedding since that I've been able to experience true joy at.

As a Christian living in Texas, you see certain trends and become part of them.  Go to college after high school, date someone, graduate and marry them.  I followed that path.  Started dating Brandon in 2005, we got married in 2008.  I graduated with my BA later that year, so I actually hurried the act more than most.  Brandon actually spent 1/2 of his college life as a married man. So many of us followed this basic formula.  I attended so many weddings at the end of college that I even started a game for us broke newlyweds: I would get one small item off a couple's registry for them, and also something that I was re-gifting from my own wedding.  I labeled it as such and told them it was their turn: keep it or re-gift it like I did!  It was fun.  And cheap.  And everyone was happy because they got at least one thing they had picked out.

Then a few years later, the second round of weddings happened, for all of our friends who didn't get married right out of college. The majority of us who had gotten married in the first round were having our first kids, as one does.

It shouldn't have surprised me that the next trend would be the round of divorces.  After all, the CDC reports that, as of 2016, the divorce rate was 3.2 out of 1,000, while the marriage rate was at at 6.9.  Some sources estimate this higher, closer to 55% rather than the 47% this suggests, but regardless of the exact numbers, one thing is for sure: half of the marriages in this country are failing.

And I was surprised when relationships around me started falling apart.  How naive am I?

The problem is, I'm so insecure, I've taken on everyone else's pains, troubles, and heartaches on as my own.  That's codependency: trying to fix everything for everyone, making it your problem, blaming yourself for other's feelings, thoughts, and actions.  Everywhere I look, I see people getting divorced and have to force myself not to think, "What could I have done to prevent that?"

Over a year into recovery I can now see that thinking is totally bananas.  Could I have done anything to prevent any of my friends from getting divorced?  Can pigs fly?  Does anyone outside of my marriage have any control over my life?  No.  It's completely bonkers to think that I have so much influence over others that I could have fixed whatever problems they were having.

My own husband has had his fair share of problems he's caused in our marriage just like I have, but one of the biggest problems he and I have faced is that of me waiting for us to turn out "just like everyone else".

Just like everyone else?  I think this, but I had to type it in quotes, because like the statistics show, it's only about half of everyone else, actually.  But when you are codependent, you love hard, and you love forever.  And when someone you love is hurt, you feel it so deeply, it affects you in such unimaginable ways, and it's so easy to focus on the pain and not the pleasure around you.

Brandon and I saw La La Land in theaters on our anniversary in January 2017. We were going through a very rough patch and I thought seeing a musical would be good for us.  Because, you know, musicals not named "Sweeney Todd" have happy endings.  Oh... musicals not named "Sweeney Todd" AND "La La Land."  Spoiler alert: Mia and Seb don't end up together.  It absolutely broke my heart. Brandon and I ended up having a huge fight outside our best friends' house when we went to pick up our kids and it was one of the worst nights of my life.

If a musical couldn't have a happy ending, how could my life?  So dumb to think, but this is real life.  These are my real thoughts.

Fast forward to present day and I realize La La Land does have a happy ending, because they each accomplished their dreams and goals, and that being in a relationship isn't everyone's happy ending.

But I couldn't think that logically in crisis mode.

Marriage is no picnic.  Not everyday will be full of romance  There are things your spouse is hiding from you.  Or things they have told you that you don't really get yet.  There are things you are hiding from them, you just don't know yourself well enough to realize it yet.  You will get on each other's nerves and want to slap each other.  You have expectations that you don't realize, and the way you were raised will affect the way you raise kids.  The way your parents treated each other will affect the way you treat each other.  You don't have to do everything together.  You don't have to like all the same things.  You will be ruder to your spouse than anyone else in your life.  There will be days you will feel no love at all for your spouse.  These are inevitable truths.

But, today in one of my Facebook mom groups, I noticed someone posted a picture of herself and her husband.  She gushed over how much she loved him, that they had just celebrated their 7th wedding anniversary, been together for 9 years, and known each other for 21.  Then she asked others to do the same: post pictures of them and their spouses, and tell us how long they've been married, together, and known.  My heart overflowed with peace and joy at seeing that there are actually people who are still together, who love each other, and who want to celebrate the fact that they have so far succeeded at what I think is the hardest job in the world: being a wife.

I had to own that last night to my own husband.  I told him I thought I was a pretty good person, a pretty great mom, and a pretty crappy wife.  I don't love and support him like I'm supposed to.  I'm too busy waiting for my marriage to fail like half of the rest of the country.  And I am so tired of having that attitude. 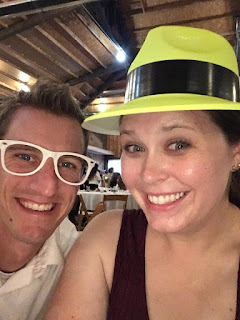 This is us. My husband and I. Brandon Glenn Strother.  We've been married for 10.5 years, together for 13 years, known each other for 21 years.  To anyone else who I've ever said I loved, friend or family, I meant it, and I still do.  I would do anything for the people I care about.  But I have to do more for him, be more for him, put him first, and love him most. And I do: I love him more than anyone else on this Earth.

This is no commentary on anyone's marriage but my own.

Marriage is no picnic, but it is a seven-course dinner.  There are aspects that will not be as enjoyable as others, but there's more to it than just that stale appetizer.  It's a long-term commitment, a journey, with highs and lows, and sure, some of us may get food poisoning along the way and not make it to the end of the meal.  But just because you get poisoned doesn't mean I have to.