The Complications of Parenting

No one wants to turn into their parents.  It's a common theme of childhood, especially when you are a kid who gets in trouble for something trivial and declare that you hate everything and everyone and will never treat your children that way.

Not like I was ever the kind of kid who said that.

While some people say its inevitable that we will actually become our parents, I've found that it is just as likely that we swing to the other side of the pendulum and try to give our children as much of an opposite experience to ours as possible.

And one is not better than the other.

This past Monday, my 5-year-old son had a soccer practice and game.  My daughter stayed home with my husband, so I was able to relax a little without having to split my concentration between a kid on the field and a kid playing on the playground.  Without any distractions, I was much more aware of what was going on in my surroundings, namely, what other parents were doing.

I try hard not to judge other parents.  You never know what someone else's family situation is, and being a parents is hard enough without having to hear from someone else what you are doing wrong.

However, on this particular day, I witnessed a soccer player slam a gate on a team mate, and a mom who just watched it happen.  The other boy was upset and his mom calmed him down, but this first  mom said and did nothing.  Then she allowed her other son to push her younger son for slamming the gate.  No words. No actions.  More like this happened while I watched intrigued.  Finally, about halfway through practice, she had enough and decided she would take the boys home.  The younger boy cried, and the older boy immediately began talking back.

And as they walked off, the boy kept yelling rudely at his mom.

This is the norm of parenting.  I used to wonder why things like this happen.  Why parents spend a lot of time threatening and not a lot of time disciplining.  And I'm not excluding myself from this, either.   I  tend to lean towards grace and compassion instead of instant discipline.  Brandon leans towards tough love, and together, we mostly make it work.  But not everyone has a partner who can balance them out.

Those of us who are parents right now were some the last generation that got told "no." Now, middle and high schoolers will come home from school complaining that their teacher told them, "No", and parents call up wondering why the teacher was so cruel to their baby.

We were told no, and we decided not to be like our parents.  And thus, we let our kids get away with murder.  In our efforts to be better than our parents, in many ways, we have become worse.

As the middle child, I've got issues.  And it's taken me years to discover that I need to give my parents some grace, too.  Just because I disagreed with some of the ways I was parented doesn't mean my parents ever meant anything bad for me.  Everything they ever did for me was out of love, even if I didn't like, agree, or understand.  And as parents now, everything we do for our kids is out of love too.  And guess what?  We've all kind of screwed up.

Our kids are going to say the same things about us someday.  They'll say things like, "My mom used to let me do whatever I wanted, and I was a hellion."  Well, hellion is an under-used word and it probably won't be making a comeback anytime soon.  But you get the point.

I've said  to myself for years now, that I will do what I think is best for my kids and eventually they'll grow up and say that while I did my best, they wished I had done things differently.  Something I do to parent my kids won't be right.  More than one something, to be sure.  I've said that to myself, but never had someone else say it to me until last week.

My 7-year-old daughter has been in play therapy for about a year now.  She loves her play therapist.  She tells me she wants to go see her every week, and for the rest of her life.  Last week, we discussed Brooklyn's progress.  I commented on some transitions that are being made in our house, and some serious situations that my daughter is aware of.  I mentioned her maturity to be able to take all of it in, and her therapist hit me with something like a ton of bricks.

She invites honesty and information because of her curiosity, but she's probably carrying a lot of things she shouldn't have to bear.

So... my goal to be an open, honest parent who communicates freely with my kids is probably adding to my daughter's anxiety.  The one thing I didn't want to do. 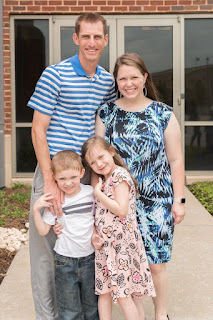