Last week, our preacher mentioned the film, "Pay it Forward" in his sermon  The film is based on the idea that, rather than paying back good that is done to you, we should be proactive in looking for good to do unto others. 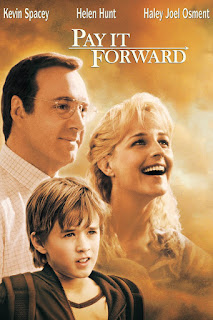 Now, the premise is the film is great, but the execution is extremely depressing, because at the end of the film, (spoiler alert) the sweet little boy trying to make the world a better place by being kind gets stabbed and dies.  Doesn't really leave you with the warm, fuzzy feeling that you should actually pay kindness forward.  Instead, it ends on a note of negativity and cynicism. Why take a message of such positivity and crush it at the end with a violent death?   After all, not many of us think, "Hmm, I'd like to be nice to people until one of them kills me.  That seems like a decent plan."  The ending negates the point of the film, that we should always be looking for good to do to others.

In the New Testament, Jesus teaches that those who follow him will be persecuted.  He promises that if you are a Christian living the way we are called to live, you will be mocked.  People will think you are weird.  We aren't supposed to look like the world around us.  If we do, we are doing life wrong.  That doesn't mean we're guaranteed death for doing good to others, but it isn't out of the question either.

What's great is that Jesus doesn't teach that works will get you into Heaven. We can never do enough good things to earn it.  It is impossible.  No amount of paying it forward or back will ever be sufficient to gain our way on our own.

So why do good, then?  Take this same idea and flip it on its head. Because you are saved, be kind to others.  Because Jesus loves you, show that love to others. Because God's grace is enough, do good to others. Be patient.  Forgive.  Let go on resentments.  You don't do good to earn your way into God's heart; you're already there.  Feel the warmth and joy that comes from that knowledge and you won't be able to help but pay it forward to others.

Even if you aren't a Christian, or if your concept of God is a little different than what I've described, if you are a friend of Bill W., you still understand what I'm talking about.  Anyone who has undergone recovery for any number of hurts, habits, or hang-ups knows that there is a power greater than ourselves that helps us become the people we are made to be.  As you finish working the 12 steps, you see that the 12th step calls you to carry the message you have received to others.  Because you have received healing, you give your testimony to others so they can have an opportunity to have the same experiences you have had.

I recently saw the movie "Wonder". It's the story of a little boy who has a facial deformity, and his first year attending school.  One of the best lines comes from one of his classmates, who declares that, "when given the choice of being kind or being right, choose kind". All of this has been on my mind because, as many of you know, I've been in recovery for codependency, anger, and food addiction for over a year now.  Recovery isn't just for drugs and alcohol, folks.  I can't go back and change my past actions.  I am currently working on step 9 in my own recovery, which is where I make amends to those I've hurt in the past.  Some of those people will refuse to meet with me or hear what I have to say.  I know that.  So I will make my amends to an empty chair, or in a letter that will never get sent.  Some of those who I do meet with won't believe or forgive me for what I've done either.  I know that too. And still others I am struggling to decide if I owe an amends to or not, because I'm too prideful and know that even if I have a small part, I feel their blame is more.  It doesn't matter. I still do my part. Because it is better to be kind than to be right, and amends is a kindness that I owe them.

Then comes the hard part: moving on.  Because once I've made my amends, it's over.  I can't dwell on it anymore.  After all, if I can believe that God forgives me for my sins, who am I to hold on to them?

I don't think it is a coincidence that the day after I heard a sermon on paying it forward, I had an opportunity to.  I drove through Starbuck's to pick up a drink for a friend (seriously, I never go to Starbuck's, which is what makes this so cool).  As I got to the pick-up window, the girl said, "Here's your drink!  The car in front of you paid for your order."  I had a choice now: keep it going or be thankful that I didn't have to spend $5.  Pretty easy choice.  I paid for the car behind me.  The girl at the window smiled and said I was the 10th car to pay it forward.  I don't know how many cars experienced the kindness, but I left feeling giddy, hopeful for humanity.

Odds are, you won't be killed for being kind (poor Haley Joel Osment).  It's much more likely that you'll make someone smile, give them a bright spot in their day, or change their life by sharing honestly.  I've said more than once that Tracey Strother is a much better person than Tracey Allen ever was.  Tracey Allen did a lot of crappy stuff.  I can't go back and fix the mistakes I made in my youth, but I can move on knowing that I live with joy and kindness in my heart, and will live the rest of my life paying it forward to others.  I don't want anyone to live in darkness, depression, anger, fear, addiction, abuse, or pain. So, here I am, being honest and vulnerable in the hopes of helping someone else.

I'm just paying it forward.  And hoping not to get stabbed.