Walt Disney World is so close I can almost taste it.

We are taking the kids with us to celebrate our 10th anniversary, Peyton's 5th birthday, and Brooklyn's 7th birthday (never mind the fact that her birthday is in October and the other two events are in January- we're doing it big this year and celebrating all at once).

So really, it's like 9+ months away, and it makes a lot more sense to countdown to our family trips this summer to Colorado or Alabama instead, but how can we not be ridiculously excited about finally taking our kids to Disney??

And I know I'm not the only one who gets like this. Over a year ago, my mom put cute Mickey and Minnie stickers all over mason jars with a slit in the lid and called them my kids' "Disney banks". Now, whenever they find any change, it goes into their Disney bank for our trip.

Today, Brandon and I decided to take the kids to Disney on Ice next month when it comes to Houston. It'll give them a small piece of magic to hold onto until it's their time to see it full-blown. Also, it'll give Peyton an opportunity to stop being afraid of "mascots". Last thing I need is a boy who sobs when he gets close to Mickey Mouse. There is no crying at Disney!

But wait, there's more! We realize we are incredibly dorky (and awesome) for doing this, but our family has started watching every single one of the Disney animated classics. In order.

Yes, you read that right.

And, of course, there are rules.

We are including only what is known as the Disney animated classics, meaning other classics like "The Parent Trap" are not included, because they are not cartoons. Also, "Mary Poppins" and "Bedknobs and Broomsticks" are excluded because they are not entirely cartoons, though they do feature some animation. Also not included are films like "Planes", because that was made through a branch of Disney animation, known as DisneyToon Studios, thus not making it officially part of the Disney animated canon. Lastly,  direct-to-video films are also excluded, so there will not be any "101 Dalmatians II: Patch's London Adventure" on our viewing schedule (I should note that Brooklyn and I both prefer "Pocahontas II" to the original, and while "Peter Pan" is forever the GOAT, "Return to Neverland" is worth watching. But, I digress).

So, here they are, in chronological order:

Italics= we've watched it during this chronological film-watching game. Bold=we don't own it. Yep, we own all those obscure cartoon-collage films from the 1940's. We're big fans of "The Three Caballeros". Technically, we also own "The Black Cauldron", my kids just don't know about it yet. It's so scary! I've been hiding it in my closet since one of our Blockbusters went out of business. Man, I miss those days... the days that Blockbuster was open, and the days they were closing and all their movies were a dollar. We helped clean out at least 5 stores. The legend of Blockbuster WILL live on, if only through our children and their psychotic movie-loving parents.

Can I also mention what dark times it was for Disney animation once Pixar came in and started showing them up? Seriously- "Home on the Range"? "Treasure Planet"? "Chicken Little"? Not good, Disney. Not good, at all.

Also, how crazy is it that by the end of 2017, there will be 75 Disney films, and yet "The Little Mermaid" is number 28? In my mind, that movie still isn't very old. Of course, I'm 31, and that film was released when I was 3, so my judgment on what is old and what isn't is clearly not trustworthy. Still, it's neat to see how much technology and animation have come since 1937. "Snow White and the Seven Dwarfs" is 80 years old this year, but only 25 Disney movies were made before my lifetime, from 1937 until 1986. Animated films get churned out left and right now.

How about the fact that Walt Disney lived for and worked on only 19 of these 75 movies? Yet, this dude will never disappear, and therefore never really die. Immortality through a mouse. Incredible.

Anyway, back to our little project: if we watch one movie every 4-5 days, we'll be able to see them all by the time we leave for our own Disney vacation. Not only are we watching these movies together, but at the conclusion of each film, Brandon asks what we thought of the movie (Bad, Okay, Good, Very Good, or One of the Best), what our favorite scene/character/song was, and records our answers on a Word document, along with a photo of us watching. Would you expect anything less from the man who has kept a log of what movies we have watched together, where, when, who with, and all other pertinent details since before we started dating? He was clearly made for me.

We will be SO ready for our trip to WDW. Possibly the most prepared family in the history of vacationing. Now all we need are our mandatory matching shirts. 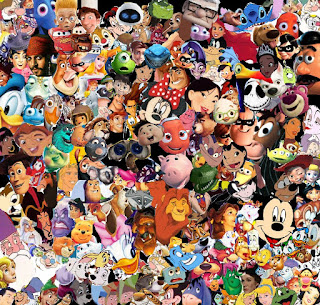