I am so in love with my children. 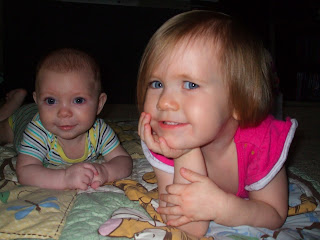 Brooklyn is 2 years and 9 months old. Right now she...

-talks all the time. Full sentences, and everyone can understand her.

-is SO encouraging and precious
Ex1: She's sitting at the kitchen table with the iPad, watching cartoons. Brandon wakes up on the couch in the living room.
Brooklyn: Oh, Daddy, did you have a nice nap?
Ex2: I put on my ID badge to go to the Administration building today.
Brooklyn: Mommy, you is a teacher again?
Me: Yes, I am!
B: Oh, good job, Mommy. I so proud for you.
Ex3: We stop by College Station on our way home from Dallas. Grandmother jokingly tells her that she's in Grandmother's chair.
Brooklyn: Oh, sowwy Grandmother.
And then she tried to get down so Grandmother could sit there instead.

-has been allergy tested. If you ask her, she is allergic to "Milk, eggs, cookies, and all things". Really, the list is milk, eggs, dogs, cats, ragweed, Bermuda grass, dust, and mold. Awesome. But at least now we have a game plan for keeping her insane eczema under control.

-plays by herself. For the first time ever in her life, she's willing to play when no one else is around. The best part is when she sits and talks to her little figurines while we're driving in the car. And everyone has a personality. Today a piece of apple was somebody's sister and the fork was telling Minnie Mouse "no".

-loves me. She loves everyone, including of course, her Daddy and Peyton, but for some reason right now she just genuinely loves me more than I've ever seen her show before. She wants me to hold her, cuddle her, play with her... and she gives the best squeezie hugs.

-is SO smart. She remembers everything. She saw a cemetery today and commented on how the flowers were all standing up, and that at Papa's grave when she went with me, Peyton and Bop, the flowers had fallen over. That was a week ago, and that was a lot of detail for a 2-year-old to remember.

-only likes to color within the lines. This is funny to me. She gets upset when she colors because she says she can't do it. I tell her it looks beautiful, but she doesn't buy it.

-is finally jealous of her brother. He got a LOT of attention in Alabama because he's the new baby, he's rolling all over the place and has to be carried everywhere he goes. It took 6 months, but it finally got to her. She's not taking it out on him. Yet. Worst she's done is repeatedly tell him, "No sir!" when he does something she doesn't think he should.

-has a stubborn streak a mile wide. She would rather sit in time out or get 20 spankings than tell someone sorry sometimes. Other times, like with Grandmother, it just rolls out like it's no big deal. But if it's something she doesn't want to do, by golly, she won't do it unless we force her to 3 hours later.

-has learned how to mess with people.
Ex1: Brooklyn: Guess what? Bop went into the *chuckling* ladies' bathroom!
Bop (My Dad): I did not!

She is my girl, my love, my sweetheart. She turns 3 in 3 months and wants to have a football party. More power to her.

-has TWO teeth. They busted through all of a sudden with no warning the weekend I was in Dallas, which may mean he's not going to be the terrible teether that Brooklyn was.

-loves EVERYONE. He loves faces. It doesn't matter who you are, young or old, male or female, stranger or friend, he wants you in his face and smiling and he will smile at you.

-gets scared by his Daddy very easily. I can't count how many times Brandon has scared him and made him cry by doing the littlest thing.

-can roll every which way. Blankets on the floor are useless now, so I just have to make sure my carpet is clean.

-can sit up in his baby bathtub, but not quite all the way on his own.

-has a favorite stuffed animal and blanket already. Way earlier than Brooklyn did.

-hates to be rocked now.

-loves to sit in the crook of my lap when I am in a chair and have my feet up on a table or ottoman in front of me. It's the easiest I've ever been able to put him to sleep.

-still doesn't want to sleep through the night. No big deal though, since he goes right back to sleep after I feed him anyway.

-gets insanely distracted when eating. I can't be making any noise or he's wiggling out of my arms trying to see who I'm talking to or what I'm messing with.

-weighs at least 17 pounds. The boy is solid.

He's my baby boy and I'm just so obsessed with him. I know no one else really cares about all this stuff, but I've got to write it down somewhere! 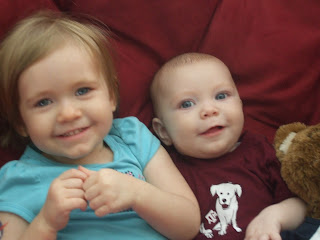