Without further ado, last week I weighed in at 171.2 pounds and today I weighed in at
for a loss of 1.2 pounds this week and a grand total of 11 pounds in 6 weeks. This does not seem monumental, sure, but remember this picture? 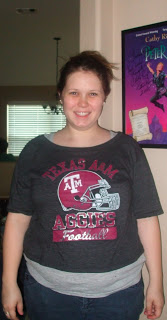 That was 11 pounds and 6 weeks ago. Lots less face, arms and waist. Oh, and hey- I have a neck again now too! And I really need to buy some more flattering jeans. These beasts just aren't cutting it. By the way, according to the Amazing Dress Size Calculator I can squeeze into a size 14 dress. By George, it's really working!

All kidding aside, I was really feeling down today, thinking that all of this is for nothing, but when I compare these two photos, I'm so pleased with how far I've already come.

I think I'm going to print this picture and keep it close to me always, as a reminder not to look like this again. REMINDER: this is about health, not vanity. THIS was not healthy. 170 pounds at my height isn't healthy either, but I'm working on it. At any rate, I don't feel like I need to crop my pictures down to size in an effort to shrink my size in pictures anymore. A thinner photo does not equal a thinner me.

In exercise news, I performed my 4-week assessment after finishing my first program of workouts on Nike Kinect+ Training. Again, I was discouraged, thinking that I had done so much work and nothing would come from it. I convinced myself that I was actually going to lose athletic ability and fitness points at this evaluation. No confidence whatsoever.

TAKE THAT, OLD SELF!

4 weeks prior, my best rep of high knees at the same duration was 32. Upped my max by 40. How in the world... Cardio, my nemesis, I despite you, and yet you are right and you are truth. You are success personified in me, darn it. I hate it when things I hate end up being what I have to do. I was hoping to be the ONE person in the world who didn't benefit from running, just like Brandon is apparently the ONE person in the world who cannot gain weight even when eating two peanut butter sandwiches and glasses of milk right before bed for two weeks. True story: he actually lost a pound doing this in high school. Trainer said he had no hope of ever bulking up. If only I had that problem.

So at the end of my workout I was given my new "fuel print", which is a measurement of both my fitness and athleticism. At my first assessment I was a 20 fitness and 29 athleticism, which I believe I already defined as being at the bottom of "pathetic". After four weeks of busting my butt and complaining about everything under the sun, I now have a 31 for fitness and a 41 for athleticism. Still not good for fitness, but according to the game, I am now more athletic than 50% of women age 20-29. If that's a true statement, I have lost faith in humanity. Not once in the history of my lifetime have I been described as athletic, and certainly not now when I'm still 40 pounds overweight. Then Brandon said something I hadn't thought of much before. Most women age 20-29 are either moms or working or both, and none of those jobs are easy to schedule workout around. He reminded me of all the women he works with, citing that nearly all of them are overweight. And most importantly, he told me not to compare our First Family with average women. I'm fairly positive that out of all the women in my First Family, I'm the only one who has never attempted a 5k, and we've got many who have done half marathons, full marathons, triathlons... not to mention those whose dedication and desire to stay healthy and in shape I am in total awe of *cough Aja Speights cough*. So, First Family aside, maybe I really am more athletic than 50% of women my age. Maybe I can kick your butt in dodgeball. Just sayin'.

Lastly, I want to give a shout out to my fabulous sister-in-law, Alyson Locke, who has also started Weight Watchers! Yay!! (Brandon thinks I need to be getting paid by WW for this, by the way- haha) It's fitting that she's doing it, since she and I are basically the same person in so many ways. I totally love how excited she got when she realized she was still under her daily points value after splurging on popcorn and a Cadbury Cream Egg :) Love that girl so much! Looking forward to her weight loss journey too! And if you know Lauren Hammond, Lauren Blanks or Kelly Edmiston give them a boost of encouragement this week. Sometimes it's easy and sometimes it's just not, but we're all in this together trying to be, feel and look our best!