I am so over exercising. Not over-exercising as in doing too much, but OVER exercising, as in I have reached my boiling point where my hatred overpowers my stubbornness to keep going.

I missed my scheduled workouts last week, so today I started my game up to get back on track. The problem with the game is that even though it can tell I missed my work out for all of last week, it acts like I didn't, and ups the ante by making me work harder than I can physically do at this point. So that, on top of how much I just HATE working out, makes me completely finished. I'm not having fun, I am not enjoying myself one bit, and every time I even THINK about running, I get so angry that I feel like I'm a kettle about to boil over. That's it. FORGET THIS.

I've been told that you have to enjoy how you exercise or else you'll get burned out and not do it anymore. Yep, I get it now. I've also been told that sometimes tough things in life just take some getting used to, like how eating sushi is an acquired taste. The problem lies when I have no desire to acquire the taste and I have no reason to change my mind. I realize that cardio burns only fat and not muscle and so it's a great way to get lean. I don't care anymore. I'm not doing it.

(Have I ever mentioned that I stubbornly put my mind to things and no one can tell me otherwise? I believe we've covered this.)

But Tracey, you say, there are a lot of things in life that we don't like and we still have to do them. Yeah, duh, I know, I have two children, a husband and a house. I do things I don't like EVERY DAY. I don't like doing dishes or laundry. I don't like cooking or cleaning. I don't particularly enjoy making the bed, buying groceries, or changing diapers. But I do them. I'm tired of having one more thing in my daily lineup that I don't like.

Am I going to become a lazy glutton? No. I'm still going to do Weight Watchers and I'm still wearing my ActiveLink so I can try to earn extra points by being active everyday. I even upped my challenge because it was becoming too easy for me to earn just one WW point of activity a day, so now I'm challenging myself to two. But I'm not doing it through running, jumping jacks, burpees, mountain climbers, star jump combos or with that awful Nike trainer game anymore. I will go for walks with my kids in the stroller, I will play tag and soccer in the backyard, I will practice tumbling with Brooklyn, and I'll play games on the Kinect. I will do so many things to keep me active because I do still need to lose weight. I know I may not lose it as fast as if I was doing hardcore workouts, but I'm over it. I'm full of too much anger that it's just not worth it anymore.

Growing and Growing Up

My children are growing up before my eyes. 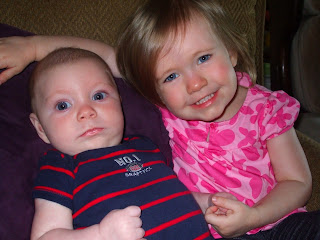 A couple of days ago as Peyton was falling asleep, he pulled my hand up to his mouth so I could help hold his pacifier in place. Whoa. A coordinated action. And so the baby phase starts its slow descent to the end. He can sleep with one arm out of his swaddle now and he is giving slobbery baby kisses (MY FAVORITE).

And Brooklyn keeps talking better and better. I'm glad other people are beginning to understand her more, but I'm not going to lie: yesterday morning she was still saying chichen and wawer, and by night time she was asking for chicken and water. In the course of an afternoon, the missing consonants have appeared.

There are bad days, but there is so much joy in my life, and I try hard to remember to appreciate all the little moments. The Houston Ballet sent me an advertisement for their upcoming production of Peter Pan yesterday. I wish we had the disposable income to go see it, because Peter Pan, as silly as it may sound, helps guide my life. It's the reason I say "adults" rather than "grown ups". I've mentioned my tattoo here before: it's the map to Neverland, where you never have to grow up. It's a constant visual reminder to always take time to play.

Today, I had a picnic with pretend popcorn. Brooklyn and I pantomimed tossing pieces up into the air to each other and catching them in our mouths. It was so much fun! This girl has a crazy imagination. She tells me she has to put glue on everything. Not just things that need fixing, mind you, but pieces of food and stuff too. I have no idea why or where it came from, but there it is. And I love the conversations we can have, especially when she's just pulling thoughts out of thin air. Take this conversation: