My baby boy is two months old already. It's bittersweet knowing this is the last time I'm going through this baby process. The thing I look forward to least is when he stops sleeping in my arms. I love holding my baby when he naps, though I don't get to do it much. I try to savor it when I can.

I'm trying my best to remember the little things about him at each stage of his young life, but it's hard. I try to remember when Brooklyn did certain things that he's starting to do and I can't remember, so I'm writing a few things down.

He weighed in at 12 lbs 3 oz and 24 1/4 inches long at his appointment yesterday. 50th percentile for weight and 85th percentile for height. And my goodness do I love every ounce and inch of him. I mean look at this face... how could you not? 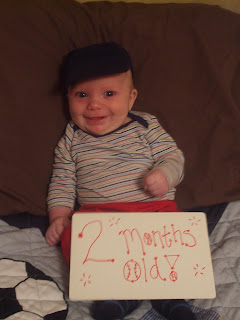