I haven't blogged about anything in a while. Perhaps it's because I've been busy you know, having a baby and all that. 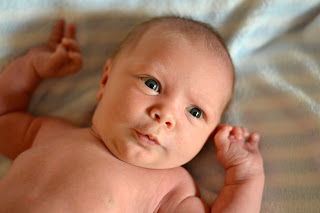 This little man is my world right now. Between feeding, rocking, playing, juggling activities, bathing him and Brooklyn and occasionally showering and napping for myself, I've had time for little else like blogging. But I can't complain.  Life is pretty good with my two wonderful kids. 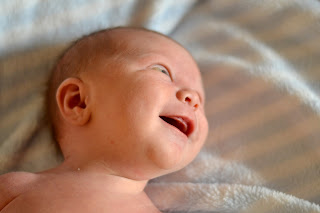 I mean seriously, look at this sweet grin. Melts my heart!

But I do have something to write about, something that I feel I'm going to be writing a lot about over the next few months. I am obese.

What an ugly, nasty word. Geez, I just had a baby, of course I'm not in shape, I thought. But it's worse than that. According to my BMI (Body mass index), I am "moderately obese". To clarify, there are four levels of the BMI: Underweight, normal weight, overweight and obese. Now, when I think "obese",  I think of the mom from "What's Eating Gilbert Grape". 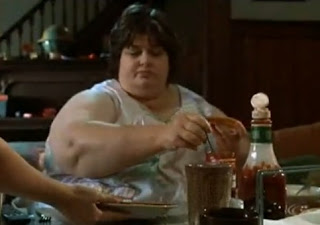 I certainly don't think of me. 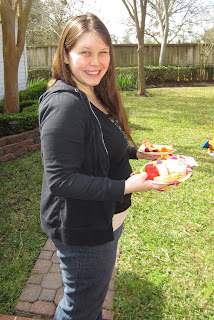 To be fair, Brandon is in the "normal" range for BMI, which seems a little crazy to me. We joke that he falls under the category "sexy by default", meaning he has a 6-pack because there's no fat to cover his abs and he has to do nothing to maintain it. Surely that's an "underweight" issue, yes? Tall, skinny, very high metabolism? The man is all bone. 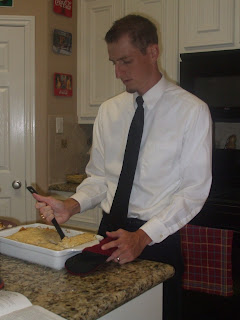 Still, regardless of the skewed system of measuring, it became very clear to me during my pregnancy with Peyton that I needed to get in shape. I talked about working out after Brooklyn was born, but knew I was going to be getting pregnant again in the not-too-terribly-far-distant future and would just be mad at working hard to lose all the weight just to gain it back again. Sounds like a lame excuse? It is. But I have no patience and no persistence. I've hardly ever stuck to anything challenging and completed it in my life, partially because I lose interest, but mostly because I just decide it's not worth it. I gave up and quit on just about everything I ever tried growing up. Soccer, karate, piano lessons, voice lessons, band, choir, speech and debate, theater- you name it: I tried it and quit it.

I hate running. I don't like to be outside. I am not a big fan of sweating. So working out has never appealed to me. I like to dance (notice it's one of the only things I never actually got into, so I never could quit it!) so my choreography with with Soundsation at NHS is really the only kind of exercise I ever get. It can turn into quite a workout, but at max 2 hours a week it isn't really doing much for me.

But as I was pregnant this time around I had a LOT of pain. Nothing was wrong with me per say, but it boiled down to the fact that the veins in my legs couldn't handle the amount of strain and pressure that was being exerted. Translation: I was too fat for my own good. Well, I was pregnant, so of course I had more weight than usual. But my weight is not just a pregnancy issue.

Here's how my weight has changed over the years:

Take away the spikes in weight gain due to pregnancy, and I've fluctuated from 120-180 roughly over the past 9 years. I am 5 ft 1 inches tall. My body is not big enough to be as big as I am and have been for too long. And as soon as I get the go-ahead from my OB/GYN next week, I'm going to start living my life a lot healthier. I don't care about being a certain dress or pant size. I don't care about having toned muscles. I DO care that I am not in pain anymore and that I learn to take care of myself. We only get one body in this life and I don't want to treat it like crap.

It's not going to be a very fun time for me, but I'm aiming to get back into the "healthy" BMI, so around 130. Basically, I'm looking to lose 50 pounds. Supposedly I could weigh as little as 100 and still be in that "healthy" range, but I disagree. After having two kids I understand that my body is not going to look the same way it did when I was 18. It's not supposed to and I don't want it to. This isn't about vanity. I don't think I look awful right now. If it were all about looks I may not bother with this. I know my family loves me. Brooklyn tells me I'm beautiful just about every day. It's not the looks, it's about something so much more important.

Brandon bought me a Kinect and the Nike Pro Fitness Trainer game as a joint birthday and anniversary present. He was very sweet when asking me if I would be interested in it, making sure he didn't offend me by making me feel fat and make it seem like he suggested that I lose weight. Luckily I know how much he loves me, I know he wouldn't care what I looked like and he'd still stay with me, and I know that all he's doing is trying to get me to stick to something that I say I'm going to do. I want to get in shape. I want to be healthy. He knows that. But then again, I wanted to play soccer and learn the piano too. He's going to be there to push me when I don't feel like being pushed. Which I, of course, will hate, but am thankful for all the same.

Which brings me to my conclusion: I am going to attempt to get back into blogging, focusing on expressing my frustrations and joys in this journey to become a smaller, healthier *me*. I'd love feedback, advice, stories, encouragement, prayers and whatever else you deem appropriate. I've never really tried to do this before, so bear with me as I figure out what I have to do in order to reach my goal. I expect there will many humorous stories to be told along the way, so stick around for that, if nothing else :)
Posted by Tracey at 1:01 AM