Pictures With My Husband 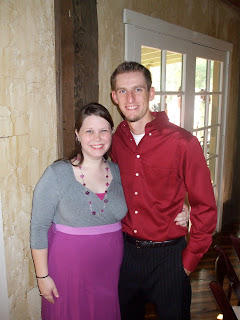 This is a picture of Brandon and me at his cousin Haley's wedding this past weekend in College Station. Before this, the most recent photo I had of the two of us together was 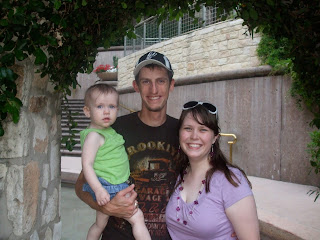 this one, taken in San Antonio on the Riverwalk at the spot where Brandon proposed to me. This was over Easter weekend, April 2011 (funny- I'm wearing the same necklace). You have to go back even farther than that to find one of JUST the two of us. All the way back to 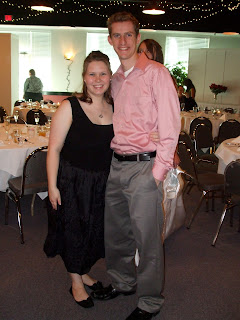 this one, from Kerie and Oscar's wedding in NOVEMBER 2010. That's right. Brooklyn was 1 month old when this picture was taken. 1 month.

We take plenty of pictures of Brooklyn and plenty of one of us with Brooklyn, but it's very challenging to find a way to take a picture of the three of us... who will take it: Sasha? LB? Cats aren't very good photographers, I've been told. They lack opposable thumbs. And when there's someone as lively and adorable as our daughter around, why take pictures of ourselves? We're old news. We go visit family and they say how much they miss Brooklyn! Aaaaand I guess they're happy to see us too, as an after thought. I get it!

But on the way to College Station this weekend I told Brandon I specifically wanted a picture of just the two of us because it had been months (I underestimated, it had actually been almost exactly two years) since we had one. I was prompted by my friend Wendi, who I notice always seems to take the time to appreciate her marriage to Wade by taking pictures when they go out on dates, to games, or for a getaway weekend. And she's got an ADORABLE 16-month-old little boy who could very easily steal all the photo ops. Wendi seems to be the one person I know who consistently remembers to document the joy of being married, not just the joy of being a parent. She obviously understands something that just recently hit me: if I didn't have Brandon, I wouldn't have Brooklyn. If I didn't have my husband, I wouldn't have my daughter. Isn't that all the more reason to want to love and brag on my spouse? Sure my daughter is cute, but so is my hubby! Aren't they both gifts and blessings? Then why does one get all my attention and the other so little?

It's funny... we just moved up classes at church from the Young Marrieds to the Young Families. No longer are we discussing how to treat our spouses, but how to raise our children... as if you can do one and not the other?? Just because we're parents doesn't mean we're not also spouses, and we still have to work on our marriage... even more so now, really, since we have a little one watching us constantly.

Some questions have come up throughout different studies I've been doing... does your daughter know how much you value marriage? Does she hear you saying positive things about her daddy? Does she see the two of you embracing and enjoying each other's company? I can say I hope so, but I'm not sure I can say 100% that I know so.

Taking pictures together doesn't fix anything, but it does show a priority I'm putting on loving my husband and wanting to remember special moments. Someday Brooklyn will appreciate all of these pictures because she'll grow up knowing that her parents are always going to be okay, always be together, and always be there for her. I suspect she'll like 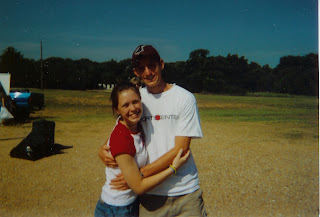 this one most of all: this is the first picture ever taken of Brandon and me. It is from July 2003 at the end of a Little Kids Camp counseling session at Iron Springs Christian Camp. I had talked to Brandon before, but really got to know him and play around with him that week. I thought he was so cute that I decided I just wanted to get a picture with him so I could remember him better. We didn't go to the same church or school, so it would take some planning to get together and hang out... which never happened. Every time I called him he was busy with baseball or work so we didn't end up seeing each other for two more years. Enter another counseling session at Iron Springs Christian Camp and it's all history from there. We started dating, got engaged, got married, had Brooklyn and are now awaiting the arrival of Peyton. Funny thing is, I had completely forgotten about that picture. After that week of camp, I started my senior year of high school and got into a relationship that led me down some wrong paths and eventually made me very depressed and confused about my life in general, all the while God still periodically in a while planting small but fleeting seeds of "Remember that Brandon Strother kid? I wonder what he's up to" hints in my mind. When we got home from camp in 2005 and were talking, deciding whether or not we should start dating, I looked in my photo album from the summer of 2003, just to see if I had ANY pictures of him from that week at camp. Lo and behold- it all came rushing back as I stared at this picture of the two of us. Me: grinning ear to ear, grabbing him tightly for a friendly photo. Him: smiling almost awkwardly at why an older girl had her arm around him for a picture. It's my favorite picture of us, and I think it always will be.

That was the starting point of us, and eventually, of our family. I want more pictures like that to show how we've progressed along the way. He'll be 26 on Monday. I'll love him more on Monday than I do today. I want pictures of us when we're 80 and wrinkled, hair growing out of moles our glaucoma-ridden eyes can't even see anymore. I'll love him more then than I can ever imagine now. And I want pictures upon hundreds of pictures documenting that love for the rest of our lives.