I've regretted a lot of things I've said in this life. Anyone who knew me in high school knows this well. I've gotten better about holding my tongue but nobody's perfect. Lately I've found a way to muck things up again. I've been talking about "being poor".

I have friends who can afford brand new cars, houses in Greatwood or Telfair, and to take trips or cruises out of the country at a moment's notice. I live in a 2-bedroom apartment in Rosenberg.

I've got friends whose husbands are engineers, lawyers, doctors, and accountants. My husband is a teacher/coach and I do part-time choreography work at a high school.

Our lifestyles differ from a lot of our friends JUST a tad.

Lots of our friends have new furniture that all match. Most of our pieces of furniture we own was handed down from a sibling, parent or grandparent, and the pieces that weren't were bought using money we got from them for birthdays, anniversaries, or wedding gifts.

For some of my friends, a nice dinner is at a place like Churrascos, while our fanciest dining out experience is maybe Chili's.

Some people I know have flat screen TV's in every bedroom, complete with either Satellite or cable. We've got Netflix for $8 a month, and a lot of movies that we've collected over the years.

I'm sick of this "1%" crap in our nation. There may be 1% of the United States that has most of the money, but we as a whole are in the 1% of the wealthiest people in the WORLD. Even me. Even with hand-me-down furniture and homemade birthday cards and everything else we do to save money. Even living in an apartment with one job, I am wealthier than almost everyone else outside of these United States. It makes me sick to live in America sometimes, because we're all so spoiled, so self-centered, focused on what we don't have, what others have, what we deserve, and what we should have. We complain about taxes when they're a necessity to help keep our society going. And more than that, they help those around us who can't help themselves. I only wish we could do more to the rest of the world...and that doesn't mean sending troops over to tell them what to do. It means loving and caring for them, it means sacrificing some of yourself and your possessions to serve others. Jesus did it. Jesus was pretty much a socialist when it comes down to it.

I've gotten so used to the American mindset of entitlement that I forget to be thankful for what I have. So no more talking about being poor. Not only am I not poor compared to the rest of the world, but I'm so rich in spirit that nothing else matters. I have a wonderful family, and we may be living in close quarters, but we're that much closer emotionally. Anyone who ever spends five minutes with me, Brandon and Brooklyn knows that we're happy and that's all that matters. God has given us so much, and I'm not going to squander it and look down on my blessings anymore. I'm not poor, I'm rich. And in the words of Lou Gehrig, today, I consider myself the luckiest man on the face of the Earth. Except, I'm a woman. 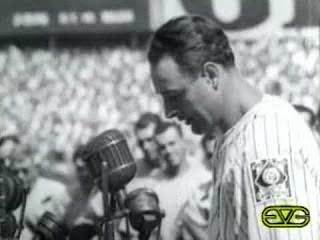