I always thought that telling someone they were a "big girl" was a self-esteem booster (unless of course you're saying it patronizingly to an overweight teen, in which case you just made that someone's death list). I still think it is for the most part. We all grow up wanting to be bigger. It's like it's ingrained in us that bigger is better, and for those of us who grew up in Texas, we got that double. Every time I meet a new child in the nursery at church, I undoubtedly will ask them how old they are.

^This is a commonplace conversation. You don't say "Wow! You are so old!" because 'old' is deemed negative. For example...

^'Old' causes much more analyzing than 'big' does.

I tell Brooklyn she's a big girl because she is in a constant state of transition, and every new thing she does means she is just that much less a baby. I read on a parenting site the other day that you have a child their entire life, but you only have a baby for a year. According to them, I haven't had a baby since October. And in a way, they're right.

Brooklyn no longer uses a pacifier. Transition key? We told her it was only for naps and bedtime because "only babies need pacis all day long". Then when she was officially paci-free, it was "Yay! What a big girl! No more pacis!"... logical syllogism being the following: Pacifiers are for babies. Brooklyn does not use pacifiers. Therefore, Brooklyn is not a baby.

She outgrew her infant carseat, and she wasn't a big fan of the new one we bought for her. My instant commentary? "It's okay, Brooklyn. This is a big girl carseat! Only for big kids!" Ta-da! I reinforce the idea bigger is better once again.

I dare you not to do this. Is it possible? Isn't it natural for all of us as parents (or even aunts, uncles, cousins and grandparents) to comment on how we change? And don't we always point out changes that we feel are positive? Most of us who are not socially awkward will not point out things like, "You have a really nasty pimple on the end of your nose", choosing rather to say things like "You are so much taller than you were last time I saw you!". We take comments like that as compliments, whereas would be very offended at the critical comments. How do you NOT point out how big your kids are getting? Sure, sometimes it's with a twinge of sadness because, as I pointed out before, babies are really only babies until they turn one. Then you've moved from infant to toddler in the blink of an eye. For the most part, you point out how big your kids are getting as a point of pride for yourself and a boost of self-esteem for them. 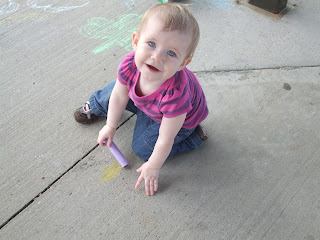 I think maybe I've overdone it. My big girl has decided she is now too big for her highchair (she had her dinner and breakfast in a regular chair at our table). She also decided to take off with an entire bucket of sidewalk chalk to her own little corner of the park the other day to play by herself. I guess it surprised me because she's apparently a big enough kid to 1)make her own decisions and 2)play by herself. Made me a little sad, but then I realized the cat's in the cradle... she's just like me. I always played alone and loved it. I think I was too imaginative and shy at the same time-I wanted to play my creative games with my toys but didn't want to be embarrassed by letting others watch or listen.

Is there any hope to revert what I've done? Can I just start calling her a baby over and over again and make it true? No, not really. In fact, I always told myself that the defining moment that made her officially not a baby was when she could say the word 'baby'. Once they can say 'baby', they start identifying babies, and they certainly do not identify themselves as babies once that happens. Well... Memphis Keyes got the honor of being the first baby Brooklyn recognized as a 'baby' on Thursday. Budeebudeebudee that's all folks.

When she gets older, if she ever gets called a baby, it'll be as an insult. Being a baby is really only positive if you are, in fact, an infant. If you're seven and someone says you're a baby, it's negative and causes tears. I wish it didn't. I wish she could say 'baby' and call herself one too. I wish she could not grin ear-to-ear when I call her a big kid. I wish she could always be my baby. But she won't. And yet, I  in a way, I guess she always will be. 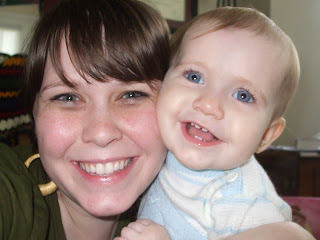