What Men See, What Women See 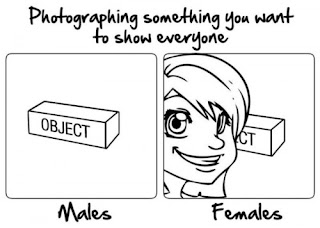 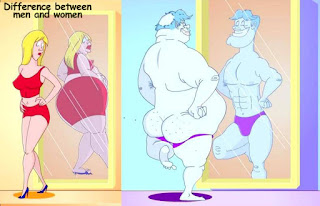 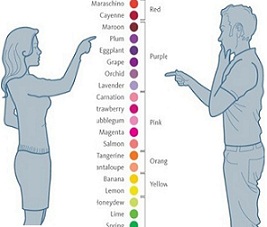 No doubt there are fundamental differences between men and women. No one will dispute this fact. Let's not even go into the biological differences of sex, but focus on the mindset that seem to make us strangers to each other. Like a liberal can't understand why a conservative is so uptight and a conservative can't understand why a liberal is so evil (or why libertarians are such potheads), men don't understand why women can't take a compliment, make everything harder than it needs to be, and feel the need to socialize 24/7. Women can't figure out why men can feel fulfilled by doing nothing, could care less about calories, and how they can call a five minute conversation "catching up".

Yesterday, Clancy and Krytondra came over for an Oscars party. Clancy stayed over all afternoon and brought his Kinect so we could all play. I got so into the sports games that I shut out the rest of the room and almost didn't even notice when Clancy and Brandon left the apartment to go pick up snacks and drinks. Brandon had to call my name 2 or 3 times before he got me to answer his question of, "Do you need anything?" Later that night, I asked him how it felt to be on the receiving end of a dazed look and an answer to a question he had to yell at me before I paid attention to him.

B: It didn't bother me. I got your attention, you answered my question, and that was it.

Bull, I said. Then I realized, he was right. Because if it were me, a woman, I would have been upset, but he was used to it. He understood that one often gets enthralled in video games and so naturally, a question has to be asked multiple times before an answer is expected. *sigh* Men.

To me, the difference between men and women is never so apparent than after a shopping spree. Woman comes home from the mall (or Target, Kohl's or Old Navy, in my case) with bags of goodies. Some for herself, some for her child, some for her husband. She waltzes in the room with a glow about her- radiance exuding from her every pore. She takes each precious item from their sacks and proudly holds them to her body to show off how they will look. Add in a Grace Kelly-esque twirl and you feel like you're transported to the 1950's. See how good she feels because of these new clothes, shoes and jewelry? She feels like a new woman- someone beautiful and special and fashionable. Her child will love the new outfit she picked out, not only because it is lovely but because mommy picked it. And dear old hubby... she lifts out the polo and sweater combo she has picked for him and says, "Won't you feel good wearing this?"

"How much did all that cost anyway?"

*balloon completely deflates, letting out a barely audible toot as it dies*

Men don't find self-esteem in clothing. Not unless they're metro and named Tom Brady anyway. When men and women both look at clothes, women see self-esteem and men see money. I buy things that make me feel good, that flatter my figure and match my complexion. Brandon buys things that are size medium. It's a fundamental difference that actually makes me very sad. I feel like I have to justify buying things and explain that retail therapy is real! The last time I had a bad day I bought myself "I Love Lucy" season 2 on DVD and "The Girl with the Dragon Tattoo" book. And probably chocolate of some kind. I don't spend like a mad man. I buy on sale. I use coupons. I shop in moderation. And I almost never go out shopping because I'm bored. So sue me if my groceries and accessories all come from Target. I go to get milk and come out with new jean capris, so what?

It's not about the latest fashion. I can't even spell most of the names of the designers actresses were wearing dresses of at the Oscars last night. It's about accepting who I am, what my shape is, and not compromising by wearing large t-shirts and sweatpants. Men wear underwear until they have holes in them and undershirts even with pit stains. In general, they don't care. I care. So women, wherever you are, get yourself a drink and raise your glass, and toast with me to hole-free underwear, sales, and feeling confident. Men will continue to see how much money we spent when we put on a new dress, but when the dollar signs fade away, they'll see what we see: we look good!
Posted by Tracey at 3:07 PM