Just a few minutes ago Brooklyn woke up crying. Not terribly unusual to put her to bed at 8 and hear some crying around 9. Most of the time she puts herself back to sleep, and sometimes we go in and hold her for a minute before putting her back in her crib. Seems to calm her down in times when she can't calm herself, and life goes on and we all sleep until the late hours of the morning.

For one thing, she's started drooling again. Last week I changed her clothes for a picture with her cousin, Pearl. When we were finished with the pictures I realized I couldn't put her back in what she was wearing before because the front of it was SOAKED through. I don't ever remember her baby stuff getting that wet from drool. Spit up, sure, but drool, no.

Speaking of spit up, that's started again too. She's gotten into the habit of sticking her fingers or entire hand in her mouth which causes her to gag and spit up. Umm, weirdo.

Also, she's had nights the past week where she decides she doesn't want to go to bed until 9:00 or 9:30, and the next morning she wakes up at 7:00! I realize this is a normal child's schedule, but it's cutting down on about 4 hours of her normal sleep, and she doesn't seem to be bothered by it.

Tonight she started crying and I decided to go in and see what was going on. She was laying down in her bed, eyes open, crying. Usually she's standing up, so to see her laying down crying sent a shock through me... is she hurt?

I grabbed her and she began screaming, flailing and throwing her head back, not being consoled by anything. Just a ball of pain and I-want-to-sleep-but-can't kind of adrenaline. We gave her some water (which she immediately tossed... she had, after all, signed "milk" to me, and I opted for agua instead. I guess I deserved the cup thrown at me) and some Tylenol and "teeth pills" (teething tablets) and all of a sudden life was decent again. Bearable and liveable. But for those 5 minutes, the world was falling apart around me a la "Inception". She is currently sleeping in her crib once more.

So, now I do what every red-blooded American mom does when their child seems hurt or sick: I Google the problem to find the solution. Do people even call doctors anymore? Why bother, when mommy blogs are open 24/7 and free?

I just wish I could understand these mommy message boards. I can't figure them out! It's like they're speaking a foreign language, which isn't fair, because I'm a citizen of the motherhood community too! I want to be let in on all these acronyms because my lack of knowledge is frustrating to no end! Who decided that we'd all refer to each other's children as LO's (little ones)? And what is DD, DS and DC? Anyone know? I have narrowed the choices down for the last letter- daughter, son, child(ren). But the first D... still baffled. Maybe "darling". As in "My DD (darling daughter) has been getting her molars too". Or perhaps "darn", as in "My DS (dang son) has been getting so cranky lately!" Brandon says DD is a bra size. That's what he sees when he sees it.

Seriously- why do we have codes for these things? Isn't it hard enough to do something simple like get your child to eat vegetables? (Which, by the way, is what Brooklyn had for supper. A biscuit, corn, carrots, peas and green beans. It's been a long time coming, but veggies are now once again welcome at our table)

And so we've come to the "Dear Abby" portion of our programming. I welcome your advice and thoughts, MOOC (moms of older children-I made that one up. Let's see if it catches on!): how early CAN children get their so called two-year-molars? My Google Mommy Scholars seem to think that 20 months is the earliest, but guess what? Brooklyn is 16 months, and another mom's child kept putting their fingers in their mouth feeling her back teeth too... could be the reason for the gagging and spit up? And she's drooling. And having weird sleeping patterns. And odd eating habits (I told you she's eating vegetables? Yeah, now she's refusing meat. Definitely out of the norm). And oh yeah, screaming her head off until we gave her pain medication for her mouth that was obviously hurting bad enough that when I asked to see her teeth she flipped. Reminded me of parts of "The Exorcist" now that I think of it. Scary stuff.

I don't blame her though. Teeth are bones that are pushing through your skin until they can burst through the surface. Imagine if your femur was doing the same thing. I have terrible images of my elbow trying to bust through and the pain I would feel. 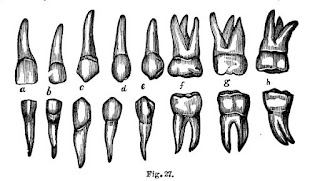