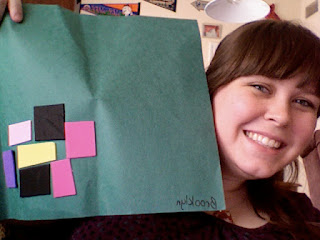 Anyone know what this is? It's Brooklyn's first craft, and proud mommy She's graduated to a big girl class on Tuesdays when I'm at Ladies' Bible Study, and she made this today :) She's never really made anything before, and I'm actually a little heartbroken that I had to fold it to bring it home. Sure it's only foam blocks that are glued on construction paper, but my baby made it :) I just love her!

While Brooklyn was making her creation, I was sitting in the first day of Trisha Clark's class called, "Being a Woman of Simplicity". We went around the room and introduced ourselves, telling each other why we decided we wanted to be a part of a Bible study about living a simpler life. People talked about anxiety, having a mind that just races, identity crisis, and trying to live up to what we think people expect of us.

It was a good introduction to our semester's study, and it made me think of a theory I came up with in high school that defines what kind of a person each and every one of us really is. I call it the "Simple and Complex" theory, with the basic premise of this being that each of us has two parts of ourselves: the part we show to others, and the part we keep hidden. Who we are at a first impression may not be the real person we are once you get to know us.

FYI: the law on blogs is that all I write is my journalism and it is naturally copyrighted, so watch it. If I ever decide to go get my PhD, this is my thesis.

To help clarify, here are some examples from literature and film:

With an SS, you get the straight story. Atticus Finch is the real deal through and through. Hides nothing, tells it like it is, and we love him. Peter Pan is forever a child at heart and speaks his mind accordingly. Forrest Gump is "not a smart man", but he knows what love is. And Scarlet O'Hara really is a southern belle snob. She never changes in the hundreds of book pages or the three hours+ of film.

With an SC, to quote an old MTV show, "you think you know, but you have no idea". You think they have nothing to them at all. Snape is a jerk, right? Wrong. But we're led to believe for the first 6 books of a 7-book series that he is purely evil and not to be trusted or liked. All of a sudden in the 7th book an entire backstory is revealed to us, showing the motivations for all of his actions we misinterpreted. And how often during LOTR is it revealed that there is more to the hobbit Frodo than meets the eye? On the surface he is just the size of a child- what can he do? And yet he triumphs again and again, proving everyone wrong about his simplicity.

With a CS, someone appears very complicated until you realize they were putting up a front to shield themselves from pain or scrutiny. Holly Golightly pretends to live her life as a gold digger, as she ignores her humble beginnings of farm life. Only when she falls in love do we see that that's really all she wanted in the first place, and she only complicated her own life by trying to follow her wallet instead of her heart. The Phantom is on the surface a very scary character. He haunts the opera house and the star along with it. Few know if he is alive or dead or who he used to be and where he came from. Obviously scarred and hurt, it becomes clear that the only thing he wants is to love and be loved. Incredibly simple after all.

And lastly, with a CC you guess at the beginning and you're still guessing at the end. I've seen all three Swedish films with Lisbeth Salander and I've seen the American remake of "The Girl With the Dragon Tattoo", and I cannot tell you a thing about that girl. She's just... she's a psychologists dream, but of course, she doesn't talk to shrinks, so there you go. Complexity at its best. Holden Caulfield is another example. I love reading "Catcher in the Rye". It cracks me up, and yet I cannot tell you whether I love or hate Holden. He fascinates me, which can be a very dangerous thing. I'd also call Sherlock Holmes a complex-complex character. From the start you are guessing how he deduces his conclusions [(Elementary, dear Watson!) <--- he never actually says that, either] and thinking "what kind of mind can figure out such mysteries?" Then you add his obsession with the violin, his addiction to cocaine, and the inexplicable instant trust and friendship he makes with Dr. Watson, and beats me who and what Sherlock Holmes really is!

Like I said before, this is a theory I came up with while I was in high school as I tried to figure out how I got mixed up with some of the people I did. The answer? CC's attracted me. If you were intriguing, I spent time trying to learn all about you, your motivations, your background, your reason for being, sometimes your reason for not wanting to be, and I was fascinated. Fascination, I contend,  is not a good thing. Like a moth being drawn to the light, when you're fascinated with something, you're slowly walking to your death without even realizing you're being swallowed up. For me, fascination turned into wanting to fix. I had many "projects" growing up. These projects were people: complex-complex people who I wanted to help. I wanted to simplify their lives, and it took me years and many failures to realize I couldn't.

I used to call myself a complex-complex personality. I shut people out and had a lot of issues. I kept things inside and didn't want people to really know me. Now, through my wonderful husband (who is a simple-simple, no doubt), my daughter, my friends, my church and a further understanding of God, I'm beginning to have a more simple life. I try to be simple-simple: I want to be free and allow everyone to see me transparently. I know I'm still way too analytical to get rid of the complex label of my personality, but we'll see.

I'm really looking forward to learning how to live a life of simplicity, because I think I really need it; we all really need it. No one needs to act tougher than they are or shield their issues. God listens. He wants us to relax and He wants to give us rest. Life is not meant to be complicated. For God so loved the world that He gave his only begotten son, that whoever believes in Him shall not perish but have eternal life. <--- That's simple, and that's it. Nothing else matters.

So here's to living simply, and simply enjoying living. Cheers.