It's one week from Christmas and just like every year, I find the time running out too quickly, leaving me very little time to listen to my favorite holiday jingles and jams. Nevermind that I have two radio stations on my dial that are playing continuous Christmas music until 12/26, I still want more. And when I want the best Christmas music, here's what I listen to. Without further ado,

Ok, I do have some further ado. This is not at all an easy list to create. Just picking and choosing from my iTunes I gathered 27, so I had to cut them down with tears in my eyes. Not really. I just said that for dramatic effect.

Also, I'd like to mention a couple of Honorable... um, Mentions.
First off, "Santa Claus is Back in Town" by The King... Elvis Presley. Talk about a suh-weeeeet blues song. It's a jam, but it's new to me, so I can't very well stick it in my Top 10 right away. Maybe next year, King.

Next, "God Rest Ye Merry Gentlemen". Love the song. Love it when almost anyone sings it (sans Rascal Flatts... ick) and love it even more when no one sings it. Manheim Steamroller does a fair job on it, as does Celtic Christmas. There's one really jammin' version with big heavy bells that I love but don't have. Anyone know it?

Also, I completely love the song "Merry Christmas, Darling", but the Carpenters are so dorky that I can't stand listening to it. If anyone has a good version not by them, let me know. I spend my time singing it acapella around my house because I just want to throw up at their constant cheerfulness. The Carpenters were like precursors to Barney, and also what I think of every time I see Will Ferrell and Ana Gasteyer's SNL skit with the middle school choir directors.

Lastly, I'm putting "Linus and Lucy", because as great of a song as it is, it really isn't a Christmas song. It happened to be featured on the Charlie Brown Christmas cartoon, but it was on other Charlie Brown cartoons too, so there.

Let's try to introduce this again:

12. What, did I say Top 10? Oops. "(It Must Have Been) Ol' Santa Claus" by Harry Connick Jr. A really fun, happy, jazzy and poppy Christmas tune. I am baffled as to why it didn't become an instant Christmas classic ala Mariah Carey's "All I Want For Christmas Is You". Happy Ho Ho Ho to you!

11. "Happy Christmas (War is Over)"- John Lennon. Maybe it's just my devotion to the Beatles, and my fascination with Lennon in particular, but there just seems to be fewer songs that are sweeter than this simple ballad to have peace at Christmastime.

10. "Run Run Rudolph" by Chuck Berry. One of the only Christmas songs ever known to actually rock someone's socks off. Seriously. I was dancing around the room to it the other day and my socks came off in a fit of joy.


9. "It's Beginning to Look a Lot Like Christmas" by Johnny Mathis. If not for Home Alone 2, I probably would think this song is silly or annoying. Instead, I imagine Rob Schneider telling Macauley Culkin to enjoy his "very own: cheese pizza" and smile.


8. "Winter Wonderland" by Jason Mraz. I love all things Mraz, and his distinct and unique cover of this Christmas classic is but one example of why.

7. "Let it Snow" by Dean Martin. I really can't get too much of the Rat Pack. Ole Blue Eyes will be seen shortly.

6. "White Christmas" by Bing Crosby. Some will be upset that this isn't higher, and as much as I love me some Bing, I've got some special Christmas favorites that just do it for me a bit more than this. (On a personal note, I don't have this on my iTunes either. Anyone willing to help a girl out?)

5.  "Carol of the Bells". Doesn't matter who sings it, as long as they do it well. Gorgeous and haunting at the same time. Could be a Halloween song... ha, ha, ha...

4. "What Christmas Means to Me" by Stevie Wonder.  Like I said before, I like fun Christmas music. I cannot help but jump up and dance when this one comes on.

3. "The Christmas Song" (Chestnuts Roasting...). There are two really wonderful versions of this song. The first is one of, or maybe THE oldest and still probably the best: Mel Torme. So smooth, that man's voice! Soothing, soft and beautiful. The song is like a lullaby when he sings it. There's also an upbeat jazzy version sung by Stevie Wonder (I like that guy!) and India Arie. Thanks, Bath and Body Works, for putting that on your mix cd's a few years ago! Totally different styles but both excellent holiday favorites.

2. "Have Yourself a Merry Little Christmas" by Frank Sinatra. Christmas without Frank just isn't Christmas at all, is it?

1. "Oh, Holy Night" by N Sync. Call this blasphemy if you like, putting a 90's/early 2000's boy band in front of Frank Sinatra, but I kid you not, this acapella arrangement is one of the most beautiful I've ever heard and without a doubt in my mind the Christmas song I sing the most around the house. "Have Yourself..." had been listed as my favorite for years and years now, but the times they are a-changin'. Plus, how can you say no to these dorky faces? 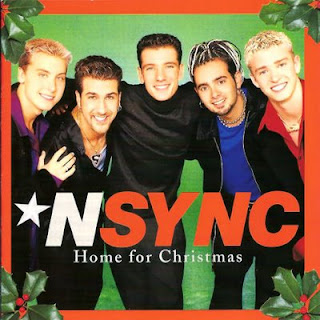 Let the debate and "You left out"s begin.
Posted by Tracey at 11:16 PM