Mixed Feelings, AKA Simon Cowell is a tool.

I've never been one for reality shows. I watched the first season of "The Mole", largely because I was strangely attracted to host Anderson Cooper. I've never seen an episode of Survivor though they've had as many seasons as "The Land Before Time" had sequels. And I've always thought it was dangerous to enjoy a show that calls our pop stars "idols".

Despite all of this, a few weeks ago I stumbled upon the first night of mentoring at the judges' homes on The X-Factor. Aaaaaand I'm hooked. I had absolutely no desire to watch it when the Fox airwaves were inundated with advertisements leading up to the premiere, mainly because I think Simon Cowell is all that is wrong with the entertainment industry. And yet, there I was that night, wanting to be friends with the super sweet Nicole Sherzinger, enjoying making fun of Paula Abdul, and wowing at the resume of LA Reid. And now I'm totally invested in the show.

Drew is beyond amazing. She's my favorite by far because honestly she's the only one whose album I would actually buy. Melanie Amaro may be the most talented of them all, and Astro is a 14 year old kid who can rap like nobody's business.

Two nights ago they had their first live show that America got to vote for, and last night they narrowed it down to the bottom two vote getters and had them sing a "survival song" in order to stay in the competition. It came down to a group of 5 black guys called "StereoHoggz", who are like Boyz 2 Men meets The Temptations, and 10 kids called "Intensity", who are like listening to Radio Disney on steroids.

For their survival song, StereoHoggz sang a beautiful rendition of the BeeGees "Emotions". Gorgeous, perfect harmonies. Intensity Two people out of the ten in Intensity sang "My Life Would Suck Without U" by Kelly Clarkson. The other 8? They danced around. They jumped. They smiled. They threw their hands in the air. They screamed the chorus. All together. Same notes. No harmony. All melody. So boring. Not to mention the boy who actually attempted to sing one of the verses was an entire half step below his ending note and had to not-so-subtley slide up to it. It was painful to watch and hear. But I breathed a sigh of relief, knowing the right group would be sent home.

Tuesday night, Simon called the StereoHoggz one of the best bands in the world (wow, go ahead and lay it on think there buddy). Last night, however, he voted to KEEP Intensity and kick off StereoHoggz... BASED ON LAST NIGHT'S PERFORMANCE, he said. Whaaaaaa?  Luckily, the other three judges made the right decision and the tweeny boppers were sent packing.

As the show ended, it hit me. I know why Simon voted to keep the kids. He said it repeatedly throughout the past episodes: they're like a new, younger Glee. It's all marketing. ALL marketing. He's a producer. He's Hollywood. He is the music industry. And what does the music industry care about? Certainly not TALENT, like they claim. It's about who and what can sell. All of these shows- American Idol, America's Got Talent, The X-Factor... they all say they're trying to find the next new thing. Someone with talent that they can show to the country. Someone whose dreams they can make come true. Fine. But what a double standard. It was 100% clear last night that there was a group of guys who weren't as energetic but doubly or triply talented vs. a massive show choir of OK talent who could sell big to a specific market. Simon voted for the ones he thought he could make more money off of- not the ones who were the most talented. He HIMSELF admitted the other group was one of the best in the world. So either he's a liar, a hypocrit or a total tool jerkwad. Or all of the above. 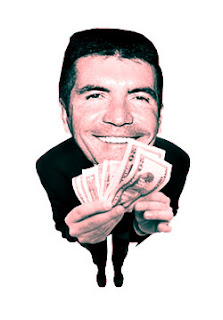 It really made me angry. I had once told Brandon I wanted to try out for one of those shows when they came to Houston, just for the fun of it and to say I'd done it. Then yesterday, despite just having a conversation about how much fun I'm having choreographing the Needville show choir moves and singing and dancing with them, I told him singing for me is not like baseball if for him, like I once thought. See- if Brandon were offered to play for a major league baseball team, he would. If I were offered a record contract, I wouldn't take it. They'd want to change me too much. Color my hair, cut it, give me extensions, whatever. Make me lose weight. Make me sing things I didn't want to sing. Make me be sexy and exploit me. Make me record "That Thing You Do" in Spanish!

As fun as these shows are to watch, I have to remind myself that these "dreams" these people think they are fulfilling are not going to make them nearly as happy as they think. I wish the best for them all, but my heart aches a bit knowing that the producers behind it all don't necessarily have the artist's best interests in mind. I hope I'm wrong, but I doubt it.

I also wish I had the strength to stop watching the show because of the hypocrisy. I might. Ridiculous lengths of stubborn boycotts do run in my family: my dad didn't go to a single baseball game from 1994 to 2007 after the players went on strike for more money.

I guess the good news is it IS a show where America gets to vote. So my advice: vote for the talent, not who can sell. That's not what music is supposed to be about. (in other words, Lakoda Rayne, you're getting the boot next!)
Posted by Tracey at 2:14 PM