Kids these days aren't growing up right. We've gotten soft, and we're teaching our kids to be soft too. What am I talking about? 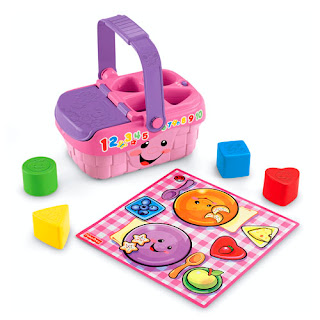 This is the Fisher Price Laugh and Learn Sweet Sounds Picnic Basket (photo from www.fisher-price.com). Adorable toy that Brooklyn's grandparents gave her for her birthday. It teaches about food and colors and shapes and numbers AND it sings! But this is one of the songs it sings:

Whaaaaat? Upon first hearing this many family members in the room said things like, "Hey, what happened to 'Ouch, he stung me?'", or "What about the second verse where we squish him up?" I guess Fisher Price, along with most other toy companies, think our kids can't handle something as evil as killing an insect... muwahahahahaha!

Please. Ridiculous. Kids are supposed to be around morbid things so they understand them when they get older! When the actor playing Mr. Hooper died in real life, the other adults in Sesame Street didn't tell Big Bird that he moved or went on vacation or something like that, they told him that Mr. Hooper died! They taught children about death because guess what: sometimes kids experience death too.

And what about all of the fairy tales? I was a Film Studies minor at A&M and one of my favorite classes of my entire college career was German Fairy Tales. We focused on the Grimm Brothers but also looked at some from other countries for sake of comparison like Charles Perrault (France) and Hans Christian Anderson (Denmark) Talk about morbid! Disney really did a number sapping them up for us, making them seem happy and joyful, all flowers and sunshine. Don't get me wrong, I'm a Disney kid! I own nearly all of the animated Disney DVD's, I decorated Brooklyn's room in Winnie the Pooh and Disney Princesses and I spent my honeymoon at Disney World in Orlando. But seriously Walt, you took some messed up stuff and made it hunky dory. I applaud him for even having the guts to do it, really. Who thought that a story where girls slice off their heels and toes to fit into a shoe could be made into one of the most famous princess movies of all time? That's right- Cinderella. In order to fit into the teeny tiny shoe that Cinderella left behind, the stepsisters go to grotesque measures to marry the prince and become queen. And did you know that Rapunzel is actually a cautionary tale about unwed teenage pregnancy? Why else would she get locked up in a castle tower if not for being promiscuous? All fairy tales were moral warnings to get children to act the way their parents wanted them to.

It's not just fairy tales either. How about nursery rhymes? I can't decide what's more disturbing: bedtime stories involving things like patricide and incest or cheerful songs about diseases and death. Ever heard of "Ring Around the Rosy"?

"Ring around the rosy,
pocket full of posies,
ashes, ashes,
we all fall down".

In the 14th century, a lovely little outbreak of Bubonic Plague, otherwise known as "Black Death" hit Europe, killing about 1/3 of the European population. People thought having the posy flower on them would prevent them from getting the disease. Ashes, ashes? They had to burn the bodies. We all fall down? Yeah, we're all gonna die. SICK!

In "London Bridge" we tell the story of how the London Bridge is going to fall down. The London Bridge has been the object of numerous terrorist attacks in England, and I'm not so sure that this ditty isn't to blame. The point of many nursery rhymes is simply to tell that someone has fallen and hurt themselves. Ex: "Jack and Jill", "Humpty Dumpty" and "Rocky-a-Bye Baby". In "Rock-a-Bye Baby" we sweetly croon about babies falling out of trees. What kind of mother put their baby in a bassinet and then put them on a branch to begin with? Call CPS on that woman!

See? I'm torn. I love the sweet, sappy Disney versions, and yet I know the truth behind them which can't help but taint my view. I didn't grow up knowing what I know now, but would I have been any worse off if I had? Was I so emotionally disturbed because MY version of "I'm Bringing Home a Baby Bumblebee" ended with getting stung? Maybe so.

The only example I can think of of someone who grew up realizing the morbidness of nursery rhymes and fairy tales was the one and only Dwight K. Schrute. Go check out the episode "Bring Your Daughter to Work Day" to see him reading the German cautionary tale "Struwwelpeter" to the children at Dunder Mifflin.

Do I want my daughter to turn out like Dwight?

Hmm...I guess I can let her be soft for a while. She can learn the truth when she's older.
Posted by Tracey at 8:35 PM