All Hail All Hallow's Eve

I absolutely love Halloween. It's by far my favorite day of the year. My birthday has always been fun, especially because it has seemed like a good time to get family together- enough time has passed since the Christmas holidays so we want to see each other again. Christmas is of course wonderful- celebrating Jesus' birth and the generosity from "St. Nicholas"... getting to decorate a Christmas tree, make apple cider and listen to Christmas songs just seem magical. But Halloween... Halloween is different. It's the one day out of the year that I feel I can do absolutely whatever I want, because I get to BE absolutely WHOEVER I want! It's a time where I get to let my creativity shine to its fullest, eat lots of candy, but mostly I think I love Halloween because it reminds me of my siblings.

My sister Lindsay is 30. I am 25. My brother Kirby will be 18 on 11/11/11 (he thinks this is WAY cool, so talk to him about the significance of the number 11 if you ever get the chance). Being so spread apart in age we didn't ever have to fight over anything because we were all at such different periods of our life. The one thing that we found could bring us together like nothing else was dressing up in clothes from the Costume Closet...and then possibly making music videos. The Redcoats and Behind the Music with Cyndi Lauper and Paula Abdul are two family classics.

Yes, I said Costume Closet. It's so important the "closet" gets to be capitalized. It started out as a Costume box, which soon became Costume boxes, then Costume boxes and Costume bags and finally half of my entire closet was dedicated to Halloween costumes. We saved all of our costumes from growing up and would reuse them in different ways. We went thrift store shopping to see if we could find any cheap additions to our collection. The green suede boots were used by Lindsay when she and Myles Turney went to a Poison concert and dressed up like they were in an 80's hairband themselves to match. The piano vest inspired Lindsay to a costume she never fulfilled- that of the piano man at ACU's "The Bean". Many of the costume jewelry we picked up became pieces of legendary costumes like my freshman year of college's Punk Rock Princess and the aforementioned Cyndi Lauper.

I moved the Costume Closet downstairs to a hardly used coat closet when I was in high school. Before it just housed winter coats and a handheld vacuum; this was a much nobler cause! Just a month or two after I got married, my mom called me to say she was going to get rid of everything in the Costume Closet if I didn't come home and salvage it. Needless to say, I took my collected archive of clothes and stashed them away in my apartment, despite the fact that we had absolutely no room for them. They are some of my most prized possessions! And now poor Brooklyn has hardly any room for her own clothes, because let's face it, Halloween comes first. Her closet is the new Costume Closet.

We always played Halloween up BIG at our house growing up. The front door and entry way were always decorated to the nines and I can hardly remember a time when we didn't participate in Trick or Treating. The only exceptions were when Halloween fell on a Sunday night, and my mom made it clear that going to church was more important. I was upset at the time, but I'm actually very thankful she made that rule; it helped me see what life's priorities should be. And I learned just to find a place to wear my costumes to AFTER church :)

My parents never dressed up, but the three of us kids did- every year. I don't think we've ever missed a year either. And, there was an unspoken rule that you couldn't repeat a costume (this is not the only unspoken family rule- you also weren't allowed to bring friends to a family reunion, and no significant others until you knew you were going to marry them... but that's another topic altogether). What got me was how creative we got- especially Lindsay. I was bragging on her this past weekend because I always felt like no matter how good my costume was, Lindsay's was always THAT much cooler. My Halloween hero, she is.

For example, here she is as Justin Bieber last year. 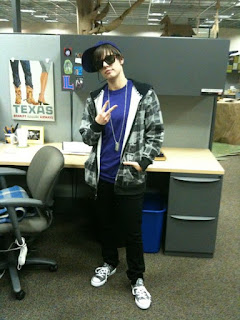 Someone suggested she walk around North Park Mall dressed like that and start rumors that Biebs was in the Dallas area. I sure wish she had. 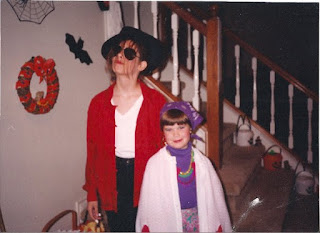 This gem is from circa 1994? I believe Lindsay was in 7th grade and I was in 2nd. Or 8th and 3rd. Regardless, I was a gypsy, and it should be painfully obvious who she was.

I have a lot of special memories of Halloween...like the time it was about 90 degrees outside and I was a magician with a plastic mask on and I kept fogging it up with my breath and sweat... and when I was an Alabama football player with a giant inflatable helmet and I got to take Kirby Trick or Treating by myself- I felt very old and responsible. He was a super cute little cowboy :) Or how about the time I was at Camp Classen in 5th grade the week of Halloween. I brought a hippie costume with me and wore it that night, and to our surprise, all of the teachers had brought Halloween costumes too! A witch and a cow and who remembers what else came Trick or Treating to each of the cabins. We, of course, didn't have candy, but we did offer them toilet paper and toothpaste. I think they took the toothpaste...

And now, new Halloween memories. This was the first year Brooklyn had a costume... scratch that. We bought this year's costume for her LAST year... in fact we bought it before she was born. It's Tigger, and it's a 0-3 month costume. It would have swallowed her alive last year, so we thought we'd save it for this year and see if MAYBE it would fit. 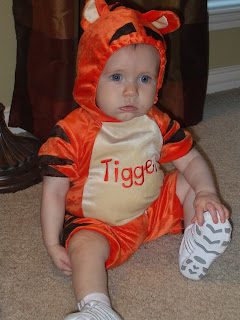 Cute, right? Yeah, but it's supposed to be long sleeves and pants, not short sleeves and Daisy Dukes. Oh well. My costume was probably about 6 sizes too small (I used safety pins and a shirt underneath) and hers was about 9 months too small. We're cheap. Sue us. No, wait, that's just an expression. Don't actually sue us... because, we're cheap.

Anyway, tonight was a great night of new memories. It had been years since I'd been to a Halloween party that wasn't for Brandon's birthday (he's never been big on Halloween because he had so many costume parties growing up. He's sweet to dress up with me because he knows it's my favorite thing to do).

It was the first big holiday party we did with our church First Family and it was the FIRST time I had ever carved a pumpkin. Which, actually I guess I still haven't done, because it became clear early on that it was a manly competition. Fine by us. More mosquitoes for the boys. 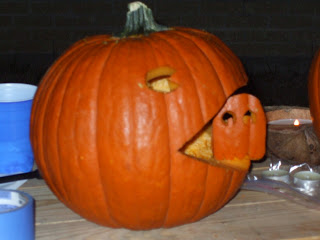 Here's ours: Pac Man eating a ghost! My invention and Brandon's creation. We even put a strobe light in it to imitate the white dots he would gobble up along the way.

It was a fabulous celebration of Halloween that involved pure unadulterated fun. No demons, no evil spirits, no witchcraft or scary bloody masks, just kids in cute costumes, adults in goofy ones and a bunch of friendly pumpkin carving. Halloween isn't evil unless you make it that way. That's my story and I'm sticking to it.

I'll leave you with this beaut (speak that last word in a Steve Irwin "Croc Hunter" accent) from 2008. Our best costume combo to date. 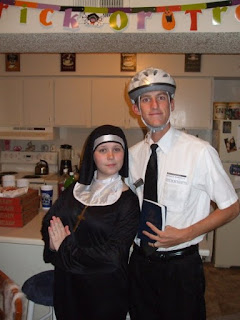 Who says we can't all get along?