An Update on the Upstairs Creepers

My last theory about the neighbors above us was that they were crackheads or drug dealers of some sort. I'm beginning to think they are something much more frightening than originally believed:

Last week I walked outside and found large chunks of HUMAN HAIR at my doorstep and all over my patio. What? My initial thought was, "Uggh, these girls across the way swept their trash over to our side" and then another thought hit me: the girls across the way are COPS. I doubt they'd cut their hair and throw it at my door just for kicks and giggles.

I looked straight up from where the hair was, and realized it had been dropped from above, through the slats in the staircase. At first I was annoyed, and then I remembered one of my favorite Tim Burton films, and promptly informed Brandon that one of our neighbors might be Sweeney Todd in disguise. This would explain the number of people entering the upstairs apartment, but does not account for where the bodies go after he kills them, as we are in their "basement". 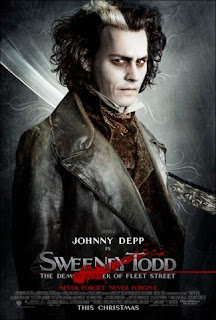 Yesterday we discovered a wasp's nest, empty, laying at our doorstep. A warning, no doubt. I must be getting close with my investigation of the mysterious neighbors, or else they would not have made me aware they know I am onto them.

The time has come: who knows a good place to buy spy gear like small hidden cameras, preferably with sound? There's a low part of our ceiling where we can discreetly screw a device of some sort and figure out what is actually going on with these people.

All I'm hoping is that they don't turn out to be aliens. Or that I wake up and realize it was a dream and we never had upstairs neighbors. Both endings are a little outdated and overused. And frankly, not very interesting anymore.
Posted by Tracey at 8:35 PM