On the Love of Cats

I have two cats that I thoroughly adore. Sasha will be 8 next month and is a beautiful tabby. I got her my senior year of high school when she was a teeny tiny stray kitten. I came over to a friend's house to work on an English project and was very upset. I was crying about something and my friend's mom (who I had never met) looked at me square in the eye and said, "Would you like a cat?" Ta-da. I put this tiny pocket kitten in my purse and brought her home. The dogs at my parents house sniffed around the bottom of my door because they sensed a foreign presence, and the next day Sasha went to live at my best friend Jacqueline's house.

Let's pause for a moment: this woman, whom I had never met mind you, offered me a pet cat because I was crying. She had already given me her favorite teapot earlier that day when I told her I didn't drink coffee. Woman was nuts. Kind and generous, but out of her mind.

Fast forward to the fall of 2009 when I was living alone in Houston while Brandon finished up at A&M. He warned me that I was going to become an old cat lady if he died first, and it didn't even take me that long. A tiny black kitten came around my apartment so I fed her. I named her Little Bit and promised Brandon I would just keep her as an outside cat. That lasted until the first weekend of December when we had a snow day. "She'll die if I leave her outside" was my reasoning... of course, she is a cat. They have fur. God gave it to them so they can stay warm. Oh well. Good enough excuse to bring her inside. It wasn't until a few days later when I took her to get spayed that the vet tech called and said, "Actually we're going to have to get him neutered". Oooooh. Glad I went with calling him Little Bit and not Missy as I once thought.

Turns out Little Bit was a stupid name anyway, because he's a good 2 inches taller, 2 inches longer and pound heavier than Sasha. We've taken to calling him LB. Especially in Houston, because we were in the Alief district, so he was all thug life back then. He loves sitting in our bedroom window, which in our old apartment overlooked the pool, so Brandon often referred to him as "Lord Byron, keeping watch over his estates and all of his loyal subjects" <--- imagine that in a pretentious, regal accent.

But I digress. Animals are amazing creatures. You know Christian, a lion who was raised in London, was taken to Kenya and actually recognized his former owners months after he was left? What love! It's unconditional, it lasts forever, and asks very little: feed me, give me water, pet me and please don't lock me in the closet even though I hide in your clothes all the time and you don't even know I'm there or mean to close the door on me (This last request is the toughest one to fulfill).

Everyday I have two cats fight over who gets to sit closer to my face. Annoying, yes. Precious, also yes. Sasha had a habit of sitting on my textbooks when I was in college so I would stop reading. Little Bit sleeps on a pillow in my arms each night.

I had to take Sasha to the vet today for her shots. She fought he getting in the carrier. She cried the whole way to the vet. She ran and hid under the bed when we got home. And tonight as we watched a movie, she sat next to me, purring and rubbing her head against mine. Even after I kidnapped her from her warm, sun-drenched spot on the couch and allowed strangers to poke and prod her, she somehow realized that it needed to be done and she won't hate me for it.

Are we so different from animals after all? Don't our children act the same way? I'm not going to bust out in a chorus of "Circle of Life" or anything, but it's food for thought. I began this post by comparing men to dogs and women to cats. Quick side note: I used to think all dogs were male and all cats were female. I also used to think that roosters made dark meat and hens made white meat. We all make mistakes. But seriously: we are animals. We are the highest order of animal, yes, but deep down we really aren't that different at all. Maybe that's why humans and their pets (or animals and their "pets", as Pongo calls them in 101 Dalmatians) love each other so much. 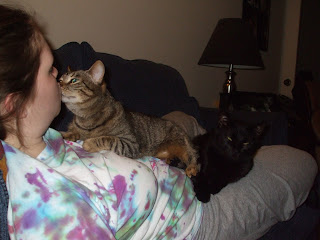