Comforters and Being Comforted

A few days ago, my sister Lindsay told me I was more of a Lucy Ricardo than a Laura Petrie. I do too many things wrong and have disaster upon daily disaster occur in my home. They're more horrific for me and hilarious for you, hence my life is more like "I Love Lucy" instead of "The Dick Van Dyke" show.

I was stubbornly disagreeing with her until today.

We decided to wash our bed's comforter, because we hadn't since we moved in to the new place. Note: If your comforter's tag reads "Machine Washable" don't believe it. Take it to the dry cleaner to be safe.

A queen sized comforter was rather large for our new washer, but we made it fit. Took 3 rounds of drying to get the job done, but it got done. I put it on our bed and noticed that large patches of it looked crinkled and dried up. Upon further investigation I deduced that the detergent had gotten onto the comforter and not gotten wet, so even though we washed the bedspread, it didn't really get cleaned. And now I had a comforter filled with dried up crusty detergent.

I did what any knowledgeable housewife would do: took a bottle of water and sprayed it all over and tried to forcibly uncrinkle every wrinkle. After struggling, pulling and feeling like I had been on the bench press for 1/2 an hour, I gave up and put it back in the washer, just to rinse it. No more detergent.

Apparently, my washer was unhappy that I didn't feed it any soap, and it took it out on my beautiful comforter as well. It was like one of the Sesame Street skits where Prairie Dawn begs Cookie Monster not to eat the letter of the day but he does it anyway, getting crumbs and pieces all over as he roars and devours his feast. When I smelled smoke I ran to the laundry room and discovered two gaping holes ripped into my wedding gift bedspread. Ruined.

This bothered me more than I should have let it, but I decided to get out of the house to get my mind off it. I'd been thinking about a change in style for a while too, so I went to JCPenney to get my hair cut. And Brooklyn cried the whole time, probably thinking a lady with scissors close to mommy's head is NOT a good idea.

I guess the hair stylist was going to fast trying to get rid of a client with a crying baby in a nearby stroller. I guess I was preoccupied with getting Brooklyn home and getting her to take a nap. Regardless of whose fault it is, my hair looks terrible, and I was already gone out of the store before I realized, "Umm, that's not what I asked for". How do asking for "bangs" sound like "botch the side of my head with a comb-over?" So unhappy. I may have well as asked for her to dye my hair red. And I was about to have another "I Love Lucy" moment by cutting it myself to fix it, though I knew that was not a good idea, when Brandon came home. (I even thought to myself: "Worst case scenario I have a funnier blog" and then immediately thought, "That is idiotic reasoning") I hate it. Not sure what to do about it, but I just feel ugly. Not to mention I was labeling home movies today and I saw myself. All I could think of was Chandler telling Monica that the camera adds "a couple... hundred pounds" when watching the video of the prom. Just a nasty feeling day. And Brandon told me I can't hire Brice Waldron to come over and look at all my clothes and jewelry and be my personal stylist because then I'll just be sad about not having the money to look as cute as she always does.

However, Brooklyn did call me "Mama" for the first time today. I put her in her crib and let her try to cry herself to sleep for a nap this morning. After about 10 minutes of plain whining, I heard, "Mama... mamamamama". She's made this noise indistinctly before, which was fun to hear anyway. But today: it was for real. I walked in her room and picked her up. She looked at me, said, "Mama!" with a big goofy grin on her face, and then lay her head on my shoulder. That was comforting. 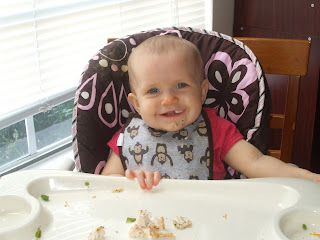 How could I not love this little monkey?

*Sigh* It's just been a rough day, but I'm trying to think positive and about the things that matter. I have a kid who loves me. My hair will grow back and I can buy a new comforter. Or not. Because it's Houston- do any of us really need comforters? Then again, I had a fireplace in my last Houston apartment. Really? The very definition of unnecessary.
Posted by Tracey at 6:30 PM